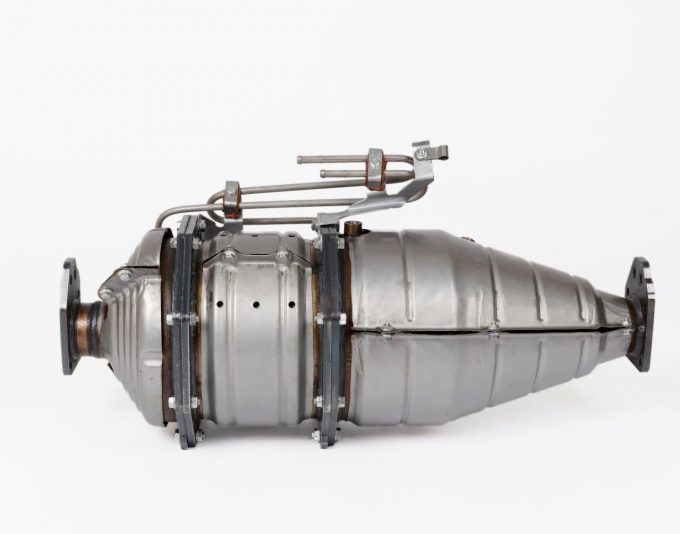 Diesel Exhaust After-treatment (DEA) is the name given to all the emission control devices used in modern diesel car and truck exhausts.

EGR systems are not considered part of this as they operate around combustion not after it.

Most manufacturers use a simple DOC and DPF combination while Volvo, MAN and others increasingly use an SCR with Ad Blue rather than the EGR System which includes a DOC and a DPF.

A lot of technicians shy away from DPF work because they fear the complexity of the vehicles. So, we are going to only talk about what we hear every day which is DPFs and DOCs, breaking them down into simple subsystems.

It’s a ceramic core within a metal housing similar in construction to a cat, however, a DPF is not a “free-flow” device like a cat. Because every alternate cell is either blocked off at the front or the back, exhaust gas is forced to pass through the sidewalls so as to exit the DPF. Particulate Matter (soot) is left behind and deposited at the bottom or rear of the DPF’s cell. Over time this soot will build up and reduce the amount of cell wall exposed to the exhaust gas, so as to gradually decrease filter surface area and increase backpressure.

• Air leaks caused by damage, fatigue cracks or leaking gaskets etc will cause DPF malfunctions due to incorrect pressure differential reading.
• Damage to the ceramic core caused by previous overheating and melting will cause low back pressure fault codes.

Opinion: Because the trapped soot particles and ash particles are bigger than the tiny pores in the DPF’s cell walls they can’t pass. They are not soluble which is why I can’t see “on vehicle” DPF cleaners working. You cannot force the non-soluble particles through holes that are too small! The only way out is backwards.

The Diesel Oxygen Catalyst or “DOC” is the diesel’s equivalent of an unleaded car’s catalytic converter. Always positioned immediately before the DPF and in later designs within the DPF housing itself.

As well as its main function of critical to the function of the DPF it provides the necessary Nitrogen Dioxide necessary for combustion to take place within the DPF during regeneration. It also provides heat for the DPF, typically operating between 250° C and 300° C.

A contaminated, fractured, or melted DOC can stop the DPF from successfully regenerating.

The pressure differential system measures the back pressure occurring in front of the DPF and compares it to the pressure after it. Essentially two rubber hoses which feed pressure from either end of the DPF and are connected to the Pressure Differential Sensor. The sensor is usually a small plastic housing with a rheostat that converts the air pressure signals into electronic signals for the ECU to read.

A failed sensor, will throw a code on your scan tool, but one that has lost its calibration, and is outputting low or high will not. This will either cause the car to not initiate a re-gen, or conversely constantly repeat attempts

• The hoses and pipes need to be checked for leaks and blockages.

• Another common cause of trouble that we hear of is the accidental reversal of the two hoses to the sensor with obvious results.

• Isuzu trucks are notorious for the pressure differential pipes clogging with carbon at the DPF end and so stopping any pressure signal from reaching the pressure switch to initiate a re-gen. Can you blow through them?

DPFs usually have one or two temperature sensors (EGT) fitted which allow the ECU to monitor exhaust gas temperature and control the temperature of the DOC and DPF during re-gen.
250° C to 300° C are typical EGTs during normal driving with 600° C the normal DFP re-gen temperature.

An EGT sensor reading high or low will cause the ECU to misread the actual temperature causing , during a re-gen, the ECU to continue increasing the real temperature inside the cat/DPF to the point where permanent damage to the cat, DPF and sensors can occur.

Induction system leaks seem to be the most common cause of premature blockage and even melting. Intercoolers, their hoses, and clamps all can develop leaks.

This is easily the number one cause of DPF failures that we hear!

• On many vehicles, BMW cars, for example, the glow plugs run on and off thermostatically maintaining combustion chamber temp, even one faulty glow plug is enough to block a DPF due to excessive soot production

• Correct vehicle-specific engine oil, not just “synthetic” or suitable for use with DPFs”. The oil must be exact or can lead to a blocked DPF within a week or two. Some vehicle types are more specific than others.

We offer free technical support to our customers, so if you have a DPF problem please call us at 1300 821877. If it can’t be fixed, then we carry a big range of light truck DPFs in Australia. Including Isuzu, Hino, Fuso, Toyota Coaster and Mitsubishi Rosa